Previous post:  From the Pantheon to Saint Teresa, Part I

We left off at the Trevi Fountain.

Carry down Via del Lavatore, which branches into Via in Arcione on the left and Via delle Scuderie on the right. You can take either, but the one on the left will save a few minutes. The street opens onto a busy road, Via del Traforo. If you look right, you’ll see a fine arch noted with SPQR: it’s the Umberto I Tunnel, which was built just over 100 years ago. It travels beneath Quirinal Hill.

Cross Via del Traforo to Via dei Serviti; shortly thereafter, take a right onto Via del Tritone. Four minutes up the road you’ll find Piazza Barberini with Bernini’s Fontana del Tritone, which he made for Pope Urban VIII. The 17th century Palazzo Barberini is nearby, on the right; it houses the Galleria Nazionale d’Arte Antica 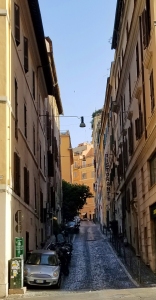 Keep to the right, passing the Palazzo, and follow the Via Barberini as it rises—it’s a gentle slope–passing cafes, embassies, and international banks. Via Barberini merges with and becomes Largo di Santa Susanna; cross at Via Venti Settembre. Santa Maria della Vittoria stands on the corner (across from Fontana dell’Acqua Felice—AKA Fontana del Mose—a huge, grand structure 16th century fountain created as an outlet of the Acqua Felice Aqueduct.).

Discalced Carmelites (“Discalced’ means shoeless)  built this incarnation of the church in the 17th century. Santa Maria della Vittoria has a modest façade; it’s deceptive. Inside, the church explodes with color and movement from frescoes and sculptures. It’s ornate to the point of being overwhelming (while some may simply find it a bit excessive). Every corner features some delightful detail. 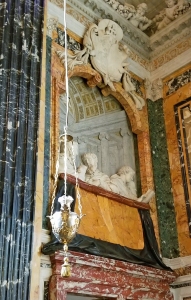 Saint Teresa, with an assist by St. John of the Cross, founded the Discalced Carmelites, so it’s no surprise that the showstopping sculpture is a representation of the nun. In the Cornaro Chapel, near the side of the altar, find Bernini’s masterpiece, L’Estasi di Santa Teresa (Saint Teresa in Ecstasy). Built as the centerpiece of a sculptural group that featured members of the Cornaro family seated in a balcony, the work was completed in 1652. 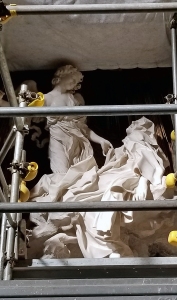 Unfortunately, when I visited, the work was undergoing restoration or cleaning, and it was surrounded by scaffolding. However, although some aspects of the sculpture were obscured, visitors were able to see the majority of the work.

And it was breathtaking

Next post: From the Pantheon to Saint Teresa: Part III (the return) 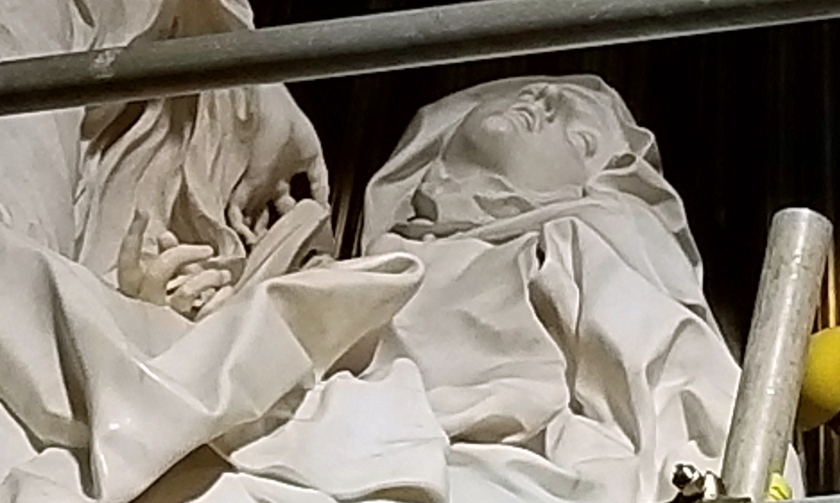 Pantheon AM / Pantheon PM (or, “The Crowds, The Crowds”)

From the Pantheon to the Capitoline

A Meander, or, Lost in Rome

Via Spectaculi, or, the Road of “Wow”

Final Leg: From the Capitoline to the Pantheon (Via Piazza Navona)

One thought on “From the Pantheon to Saint Teresa, Part II”