Chiesa di Santa Maria del Carmine was founded by a group of Carmelite Friars from Pisa. The church and associated convent date from the 13th century. Both buildings have been remodeled consistently since, thanks to the city and to wealthy patrons.

The church suffered a horrific fire in 1771, and it was rebuilt right after. That refurbishment has left it a Rococo delight (if you like rococo, that is)

The church hosts two chapels—one commissioned by the Corsini family (those of the opulent, golden palazzo across the river). The family desired a grand environment for the remains of an ancestor, St. Andrea Corsini, Bishop of Fiesole (he had been educated at Santa Maria del Carmine).   Corsini was canonized after people spoke of miracles occurring at his tomb.

The second chapel, the Brancacci Chapel, offers a dizzying masterpiece of the early Renaissance: a fresco cycle of Saint Peter’s life. The Brancacci family–merchants and diplomats—commissioned it in the early 15th century.

Masolino da Panicale began the fresco cycle of scenes from the life of St Peter, but his assistant, Masaccio, ended up in charge of the cycle after Masolino left for Hungary. Masaccio was called to Rome before finishing the frescoes. He died while there, and so the project remained incomplete for about 60 years. Fillipino Lippi completed it.

If you wish to visit the church, there is no charge; however, if you wish to visit the chapels, there is a fee (and a separate entryway). Tickets to the chapel aren’t expensive (about six Euros now, I think). Entry is timed at ticketing. A maximum of 30 people are allowed in for each 30 minute period, so unless you purchase tickets in advance, anticipate waiting in the piazza. The Brancacci chapel is small, so this limit is a good thing.  There is no pushing, or rushing; there is relative quiet as everyone is preoccupied with reading the paintings, and there’s an opportunity to sit in a nearby pew, taking in the chapel’s entirety, and meditating on its transcendent power. 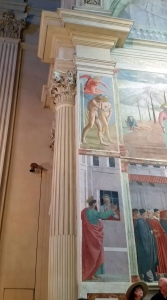 Massacio’s The Expulsion from the Garden of Eden is an astonishing work in its display of visceral pain. Eve’s agony at her exile is profoundly real, profoundly human.

Masolino’s Temptation of Adam and Eve. The serpent has a human head. Possibly it’s a woman’s.This work provides quite a contrast with Masaccio’s Adam and Eve.

Madonna del Popolo, wood panel, c. 1260.  This Madonna and child is by an unknown artist. This painting has been associated with miracles and venerated by the community.

Unfortunately, because of the lighting, I wasn’t able to capture the richness and vibrancy of these works. Maybe next time?

A curious bit of gossip has it that, while in the chapel, sculptor Pietro Torrigiano broke Michelangelo’s nose because he didn’t appreciate Michelangelo’s critiques. Torrigiano  fled Florence before Lorenzo il Magnifico could hear about what he’d done.

Next: The convent at Santa Maria del Carmine.