In 2017, I visited Florence with family members, one of whom sculpts. He’s always studied Michelangelo’s works, and so this trip had a special Buonarroti focus. 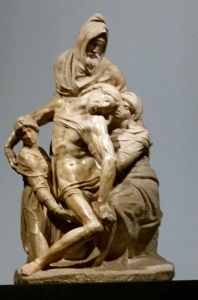 First, we hit the Museo dell’Opera del Duomo, which had finally reopened after a long period of refurbishment. This meant that my family was about to view the Bandini Pietà (AKA The Deposition). Michelangelo worked on this in the mid-16th century. Apparently, he had intended this work to stand at his tomb, but he lost interest in it—in fact, he attempted to destroy it (rumors suggest he was impatient with the quality of marble). In this grouping, the figure who stands behind and above Christ is Nicodemus. Allegedly, the hooded face is Michelangelo’s.

Second, we had a pilgrimage (of sorts) to the town of Pietrasanta, in the province of Lucca. It stands at the foot of Tuscan alps. In 1517, Michelangelo stayed here while he was hunting the nearby Mount Altissimo for marble to complete the facade for Florence’s Basilica di San Lorenzo; apparently, it was a purer marble than even Carrarra stone. My family member wished greatly to visit Pietrasanta, so, early on a Wednesday morning, we went.

We arrived Pietrasanta well before noon, detraining just near the heart of the town’s historic center—and it was dead quiet. No one was out for their morning coffee, no one was heading to or from work. I saw a few women at the end on one street, but little more. Perhaps it had to do with the already-intense heat. Outside of the piazza, there seemed to be few shops or restaurants; those, and a school we passed, were closed. We walked through narrow streets lined with yellow, white, and terracotta-colored buildings. These seem to have been residential, artists’ studios, or both. To be honest, it was a bit hard to tell as everything was so quiet. It was an opportune time to visit, in other words.

Apparently, the population in Pietrasanta consists largely of artists who flock here from all over the world. Fernando Botero lives here (his statue, The Warrior, stands at a busy junction in the town, and the Chiesa S. Antonio e San Biagio o della Misericordia, in Via Mazzini (just off the main square) features two frescoes by the man: The Gates of Heaven and The Gates of Hell. 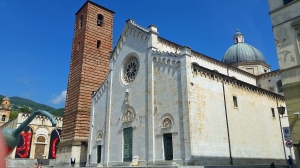 We walked the streets to the base of a hill (and a closed museum) before turning right and heading back for the Piazza del Duomo. There stand not one but two major churches. One a Romanesque medieval church (that is San’Agostino). Its religious order was outlawed under Napoleon; the building is now used as a gallery and events center. Nearby stands the town’s Duomo– Collegiata di San Martino, clad in white marble with engravings of biblical events above the doors and a magnificent rose window. 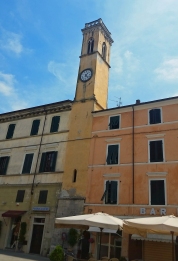 Inside of the brick campanile next to the church, there’s a self-supporting circular stairwell that takes you upward. According to legend, Michelangelo designed this stairway while he was spending time in Pietrasanta. The campanile isn’t the piazza’s only association with Michelangelo. Bar Michelangelo—just down from the Duomo—asserts that Michelangelo worked there in 1518. 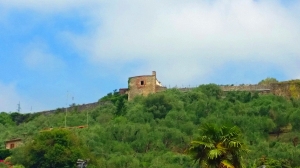 The piazza itself—bordered with bars, cafes, palazzos, and churches, opens on one end looking toward an ancient fortress rising over the town: Rocca di Sala (14th century. Abandoned in the 19th century).

Public art fills the square (while I was there, the exhibit featured gigantic, vibrantly-colored chili peppers).

At this point, it was time to do what we can here to do. My family and I walked to a shop that specializes in sculpting tools–the internationally renown Milani Utensili. It wasn’t an altogether unpleasant walk (I love my family’s company), but–to be frank–it wasn’t the best. This was on me—I was foolish and didn’t really plan our route. We ended up walking miles without shade, adjacent to a busy roadway, getting caught in a roundabout on a national road, and staggering down a long provincial road (equivalent to a US state highway). When we arrived at the shop, the assistants were more than kind. They gave us water and tried not to laugh at our having walked there. My travel companion seemed delighted sorting through and examining the various tools and talking to the shop assistants about sculpting in general. When we’d finished, they were kind enough to call us a cab. 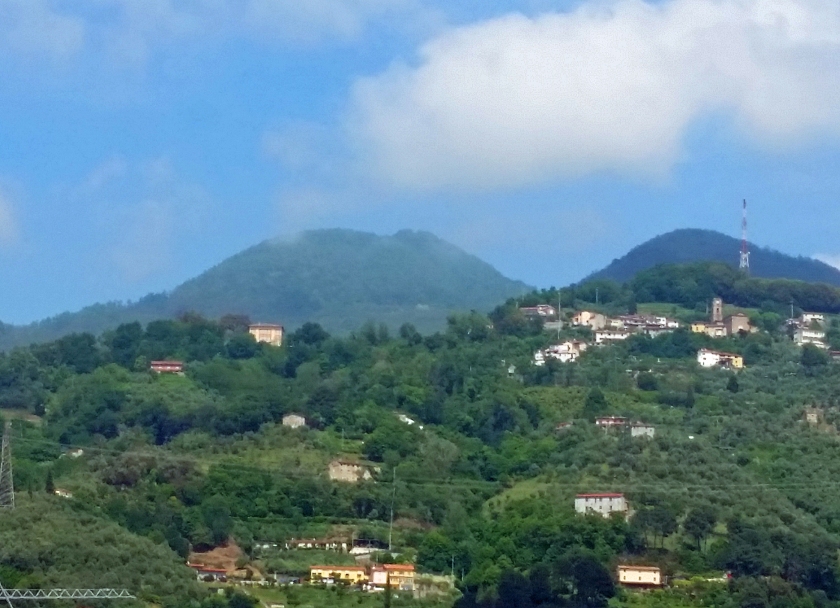 We returned to Piazza del Duomo, enjoyed water and wine at a café, and took the next train back to Florence. We were exhausted from the heat, but it was a very pleasant day trip. Regarding the historic center, Pietrasanta a a low-key, eminently walkable town with visual delights galore. It’s worth a a good few hours at the very least.