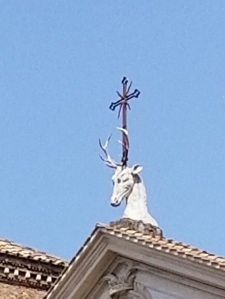 the corner from the Pantheon and Via della Rotonda.

It’s been rebuilt a few times. The church’s campanile is 12th century; its facade is c.
1700s.

The deer’s head refers to the tale of
Sant’Eustachio, a Roman general who converted to
Catholicism while hunting:  a cross
appeared between the antlers of the stag he was after, and he became a Christian on the spot.

From the Piazza della rotunda, you have this angled rear  view of the church. The columns beside the foliage-covered stones are remains of Thermae Neronis (Nero’s Baths; 62-64 AD). Other columns from the Baths have been repurposed to help support the Pantheon’s portico.