nlike many of my jaunts, this walk featured a destination: Chiesa di Santa Maria del Carmine to view the Brancacci Chapel’s frescoes by Masaccio and Masolino. I am breaking this walk into three parts.

Part I: Via Dante Alighieri

From Piazza del Duomo, head down Via del Proconsolo a bit–jut past Palazzo Pazzi–and right at Via Dante Alighieri.  Via Dante Alighieri is a narrow space; you might find yourself pressing into the side of a wall to allow a slowly-moving vehicle by (I panicked once when a minibus came through, but, happily, there was actually enough space). 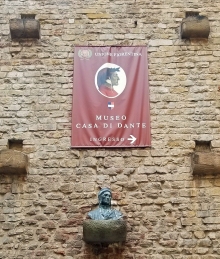 At Via Santa Margherita, find two notable sites on this tiny street; the first is Casa di Dante, a museum dedicated to the great poet. The museum stands in a building where, according to conventional wisdom, Dante was born and raised.

Across the street, see the 13th century Chiesa di Santa Margherita de’ Cerchi. Apparently, Dante was married in this church.

The Portinari family patronized this church as well, and many family members are entombed here. Beatrice Portinari, Dante’s great love, has a tomb (see this post) although there is a possibility that she’s actually buried at Basilica di Santa Croce with her husband, Simone dei Bardi, and his family rather than with her birth family.  People leave letters for her to this day. 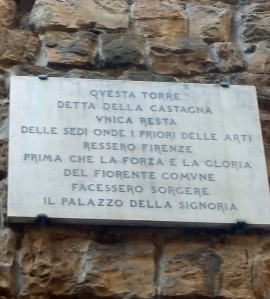 Just around the corner from the museum, across Via Dante Alighieri, you’ll find Torre della Castagna (nicknamed “the chestnut tower”). It’s an 11th century tower where the Signoria met prior to the construction of Palazzo Vecchio. 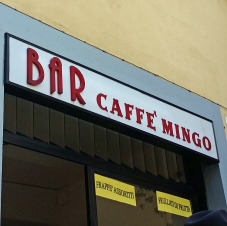 There’s a small bar in the adjacent Piazza San Martino, which provides a fine opportunity to sit and enjoy the ambience of this medieval square (fun aside: the server dressed like the Birra Moretti man).  There’s a Carrefour Express a little bit down Via Dante if you’d prefer to picnic.

From Piazza San Martino, turn right to go down Via dei Magazzini, a quiet street of shops, restaurants, plaques, and shrines. An arch connects two torri at the intersection with Via dell Condutta (Via dell Condutta is an amazing street by the way; it truly reflects medieval Florence).

Continue down, and the Palazzo Vecchio comes into view, and you get to enjoy all of the pleasures of Piazza Signoria.

Next post: To Cappella Brancacci–Part II: Lungarno and Palazzi