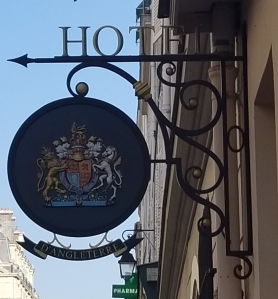 His room was #14–apparently, you can reserve it.

In 1783, the hotel was the British Embassy and the planned location for the signing of the Treaty of Paris (which would end the Revolutionary War). Apparently, when Benjamin Franklin, John Adams, and John Jay approached the hotel, Franklin refused to enter the Embassy (“enemy territory”). The signing occurred a few doors down at the Hotel d’York (56 Rue Jacob)

You never do now what you’ll run into on an aimless ramble!