Leaving the Brancacci chapel. exit via a door to the left of the chapel, make your way toward the convent’s cloisters (which also houses a gift shop). Some quick context here: while contemporary English typically defines “convent” as exclusively female and “monastery” as strictly male, up until the 19th century the terms were interchangeable. The people who lived in the convent of Santa Maria del Carmine were members of the Order of the Brothers of the Blessed Virgin Mary of Mount Carmel, a group associated with veneration of the Virgin Mary (they were believed to be under her special protection). As with the church, the convent’s construction began in the 13th century. Over time, as the church acquired more land, and the convent was enlarged. It was remodeled often, and, for various reasons, not much of its decorations remain. There is one major exception, however. 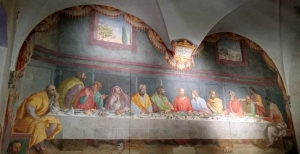 The convent’s refectory features a fresco of The Last Supper by Alessandro Allori (1582). 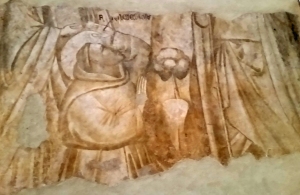 There’s also art that has been damaged over time. One example is a 14th century detached fresco fragment: a portrait of St. Francis.

These cloisters were built in the 17th century; they open onto a pleasant courtyard. They provide a cool, quiet place of respite before returning to the streets of Florence.

After Leaving the church, retrace your steps through the piazza, Borgo San Frediano, Piazza Nazario Sauro, and along the Lungarno   and as you begin to make your way back to Piazza del Duomo. After you cross Ponte Santa Trinita, I propose a slight deviation.

After crossing Ponte Santa Trinita, keep on Via de’ Tornabuoni. Pass Palazzo Spini, and turn left onto Borgo Santi Apostoli (a street I wrote about here) for a cooler, atmospheric, and less-populated way back to Piazza della Signoria and then Piazza del Duomo.