Once, I had the best of all fortunes to have visited Paris with my dearest friend, K, a brilliant, funny, and kind woman whom I’ve known more than half my life. On an early morning in the Marais, we enjoyed a coffee at our lodging and, leaving husband and children to sleep in, we headed to walk the streets, quiet and gold in the summer morning’s light. 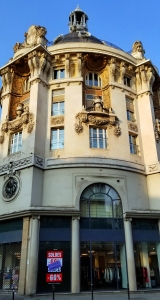 We zigzagged through the quarter–cutting across Rue Saint-Martin, between La Gaîté-Lyrique and Square-Émile Chautemps at Rue Papin, across Boulevard de Sebastopol, and onto Rue Réaumur

At the corner with Rue Réaumur stands the impressive Potin Building (now a Monoprix shop). The name F Potin is engraved on the sides facing Boulevard de Sebastopol and Rue de Palestro. Félix Potin, an extravagantly successful shop owner and chain store innovator, built this structure in 1910 as both shop and company head office. 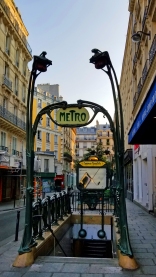 In 2015, while performing restoration, workers discovered a mass grave in the Monoprix’s basement. The land had once been used as a cemetery (St. Trinity, closed in the 17th century).

Rue Réaumur was built in the late 19th century as part of the reconstruction of the Parisian cityscape. Here, a wide, bright, and tree-lined street, you find buildings that run from glass-and-steel structures to gothic, art deco, and art nouveau extravaganzas that are variations of Hausmann’s style. It’s really a showcase for late 19th/early 20th century French architecture. 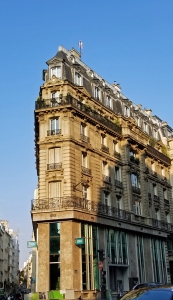 The City of Paris stimulated this creativity by sponsoring a façade-design contest (the annual competition lasted from 1902-1914). As always, while walking—look up! Be sure to catch the many fine flourishes and details on the upper floors—the French balconies and other clever wrought iron items, the domes, stained glass, sculptures, clocks, mascarons (carvings of faces)—the street is undeniably rich in decoration, but you  may not get that impression if you’re on the pavement looking straight ahead. Also peer down the side streets—you never know what will come into view (triumphal arches, murals, grand churches, opulent houses, and cozy café-lined alleys).

The enormous, astonishing Opéra Garnier (built 1861-1875) certainly has some design excesses, which might not be to everyone’s taste, but its opulence is pretty jawdropping.

We were unable to go inside as it was still closed, so we opted to find breakfast.

Café de la Paix was just opening, so we took an outdoor table under the awning. We ordered  Café au lait and a single plate of rolls to share (I don’t enjoy breakfast, but I don’t mind a morning croissant in Paris!) The server, however, brought us two plates laden with breads, jam, and butter. I managed most of one croissant and wrapped the rest in a napkin to take back.

We lingered, sipping our coffees, nibbling at French pastries, talking, and marveling at our environment, It’s one of the greatest mornings of my life. Thank you for that experience, K! You’re the best ever.

We made our way back to the flat via Boulevard Haussmann, St Denis etc, and that jaunt will be the second part in this series, Café de la Paix to Rue Saint-Martin